14,653 persons were known to have HIV in 2018, 657 newly diagnosed — 13.4 per 100,000, but 36.7 per 100,000 for blacks. These are undercounts. Alabama provided medication for only 1,156 of them. Within the black community 51% of newly HIV infections occur among men who have sex with men (MSM). Stigma against LGBTQ persons generally is high. Many of these individuals do not identify themselves as gay or bisexual.Young black males 15 to 29 years old have been identified as a high-risk group. Black females are approximately 9 times more likely to become infected with Hiv than white females. The state began a social media campaign to raise HIV awareness and lower stigma which appears to have died in 2017. Public education in Alabama is poor.
(Source alabamapublichealth.gov/hiv) 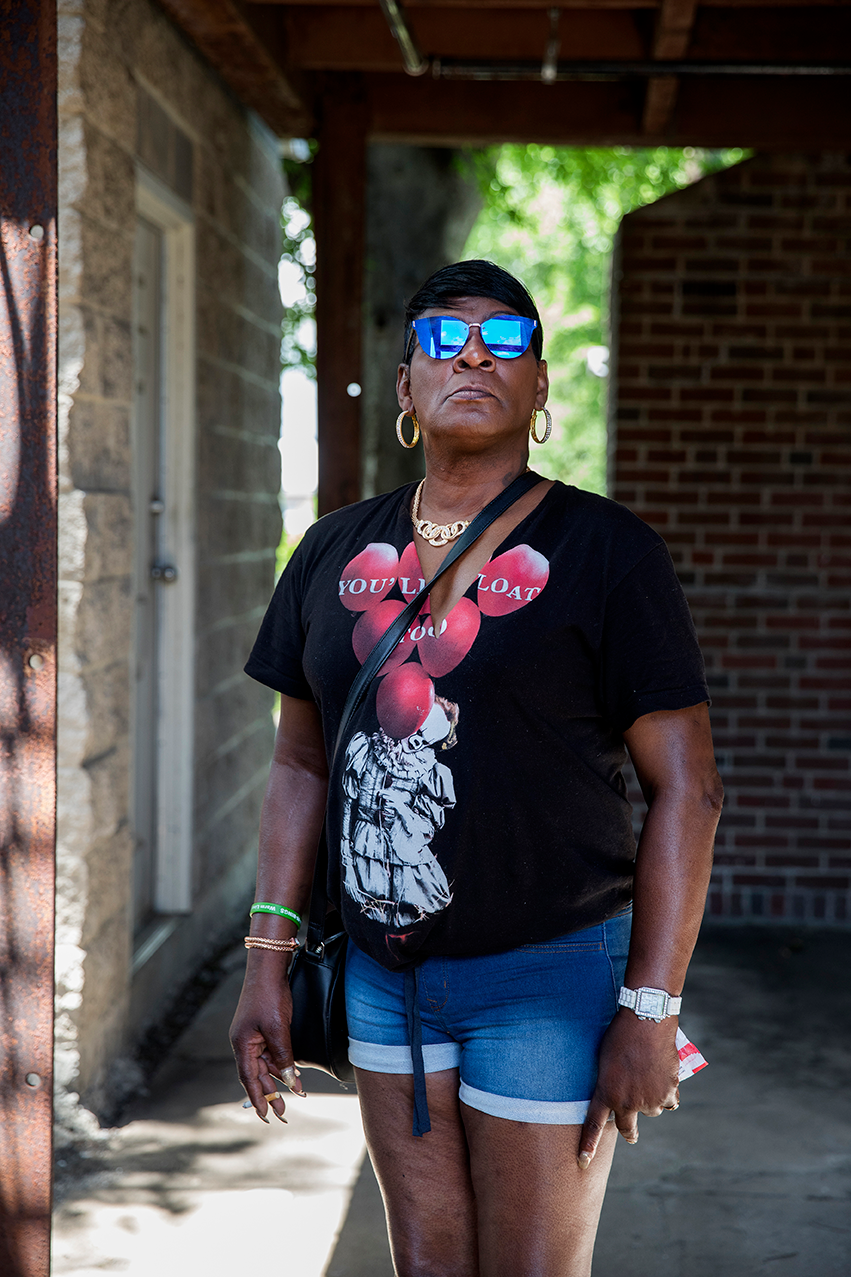 60 years old, lives in Birmingham. I‘ve been living with HIV since 1995 and am transgender.
If, like Mimi, you’ve been living with the virus for 24 years, life has plunged all the depths. When she first heard that she was positive she chose denial: “That was my way. No one was allowed to know. “Only after a suicide attempt and many years of silence did Mimi tell her brother. Fortunately, he reacted with kindness.
It’s not easy, living in Alabama’s Bible Belt, where quickly so much misery is seen as a punishment from God. But the church where Mimi goes is good for her, “they accept me as I am with everything that goes with it: me living with HIV, me being transgender. You know, I’ve learned that I’m worth it, people don’t have to put me down.
For the future the most important thing is that I’ll get my own house, and get my life sorted out. There’s a lot of discrimination in Alabama, it’s changing but slowly. I wanna see that change!” 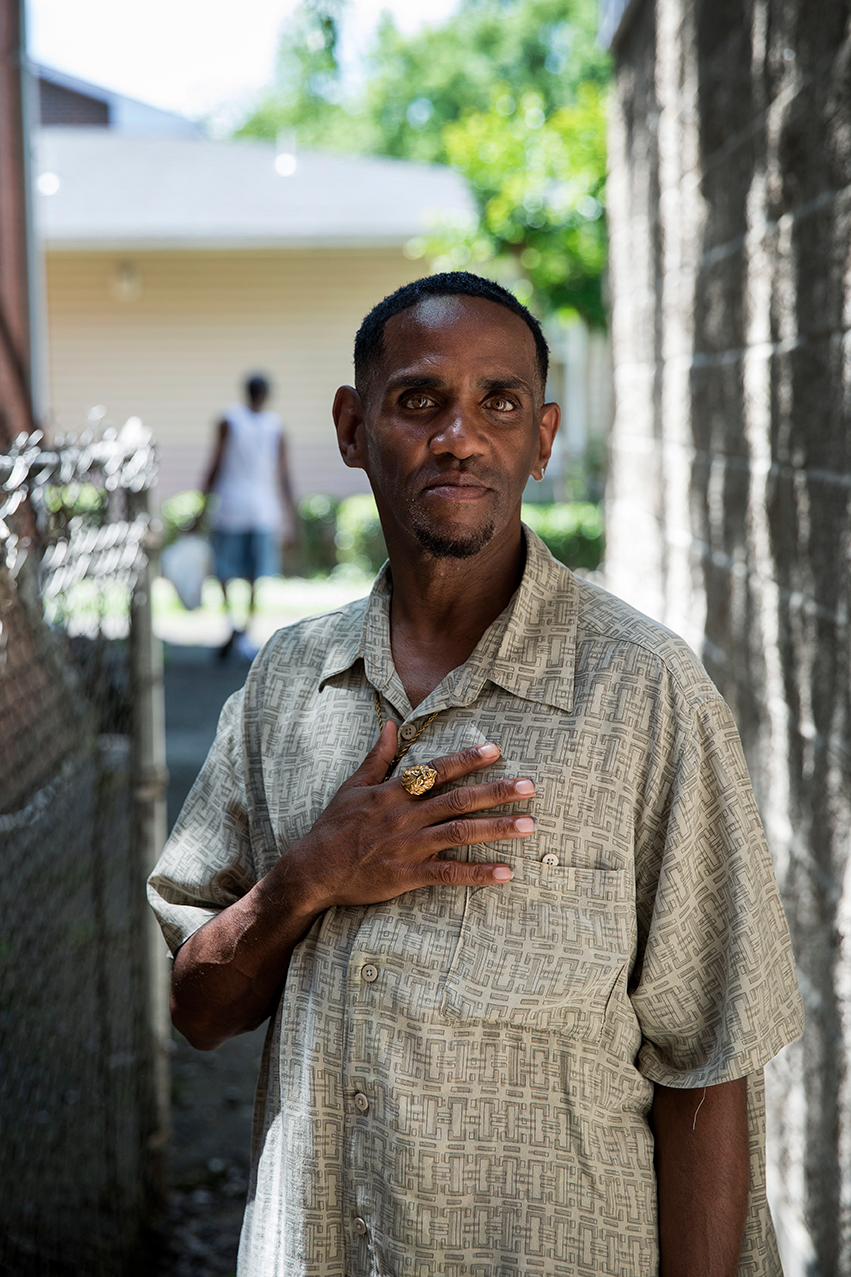 54, born in Brooklyn, New York, now living in Birmingham. Daniel has a degree in interior design. Since 1982, Daniel doesn’t live with HIV, but HIV lives with Daniel …
You know: “I like to shop with other people’s money…. that’s what you do if you’re an interior designer, right? “ He laughs and thinks back to the time he still lived in Brooklyn, New York. They were good times. But you can imagine that when you hear in 1982 that you are HIV positive, the light goes out. But he’s still here and medically this is a miracle.
“You know, I have double trouble… I’m fighting not only against HIV but also against my addiction. What gives me strength is my faith in God!”
Nothing stops him from looking optimistically to the future. In 5 years’ time he thinks he’ll be a pastor. With faith to help others, give solace, that’s the most important. “Here in Alabama people are pretty paranoid, but I can help others with my story and with my faith.” His simple and powerful message for the world: “Have more empathy and love! Live and let live! ” 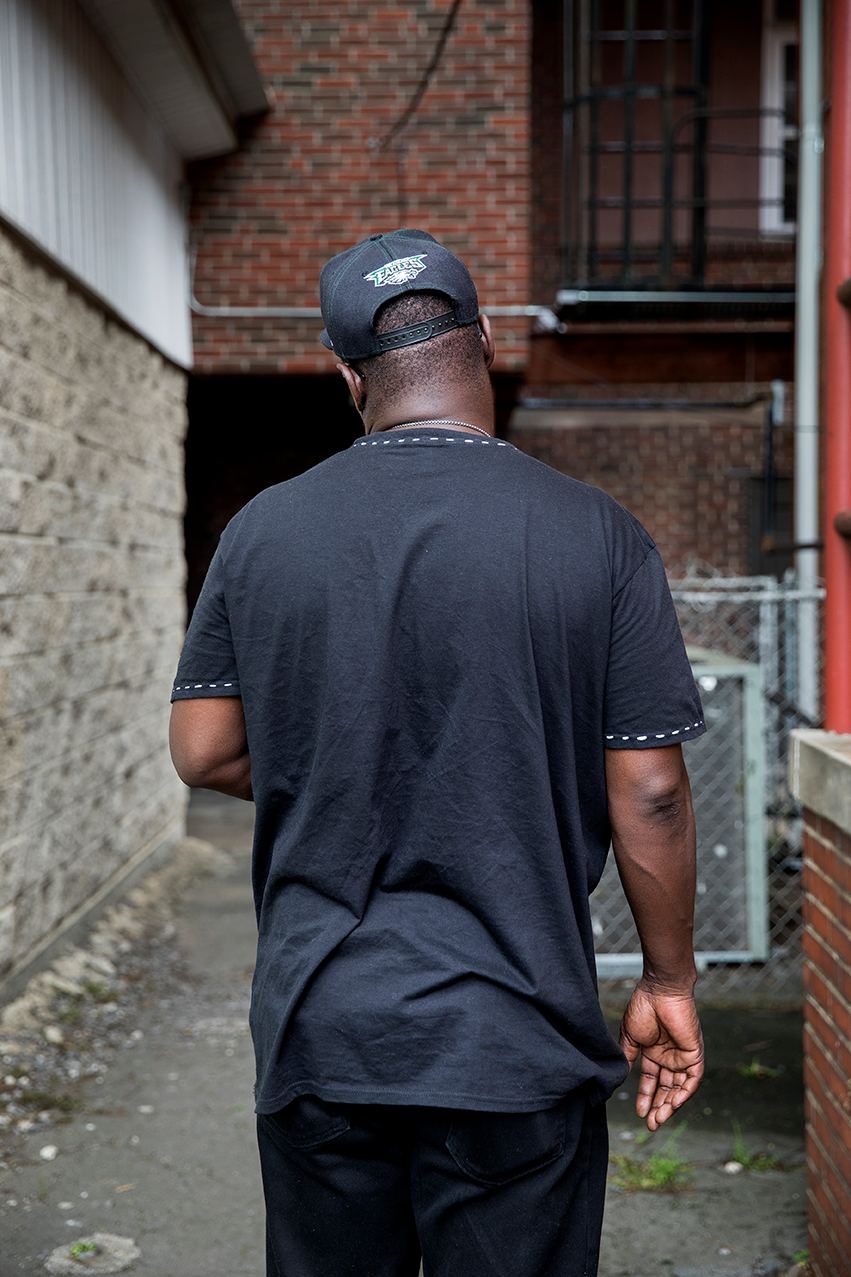 48 years old, has lived in Birmingham, Alabama all his life. He’s in a relationship, “we don’t talk about HIV together… No we don’t do that”.
Derrick discovered 15 years ago that he was HIV positive. It was a shock “I was scared and didn’t talk about it. The doctors helped me get in touch with others who were also positive. My friends and family continued to support me.” What would Derrick like in the future? “To tell young people about my life, to support them and help them to make the right choices, something I haven’t always done myself.” 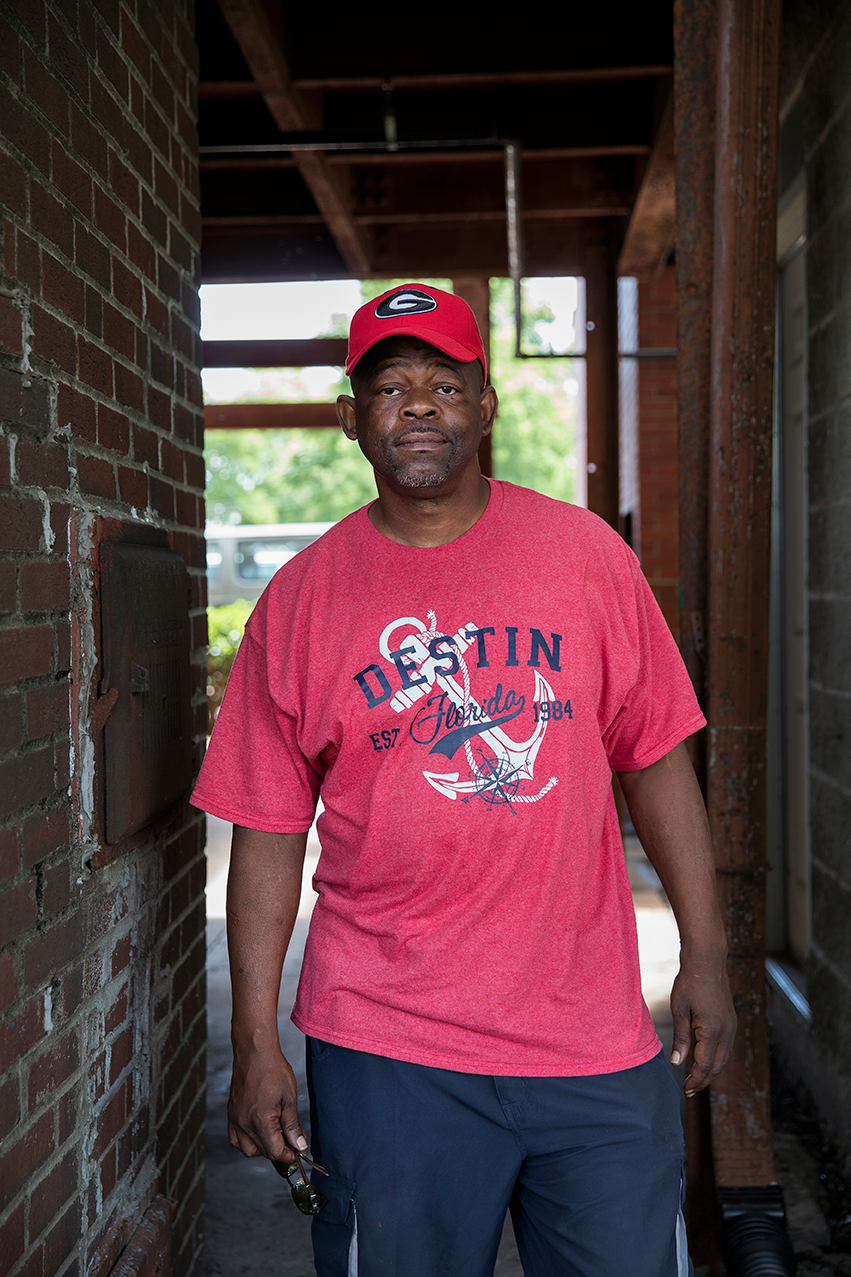 55 years old, first lived in Florida and now in Alabama. John’s family has always been there for him.
Because John used drugs, he decided to take the HIV test: “When the doctor came and said I was HIV positive, the lights went out. I was afraid of the negative reactions. I felt like an outcast”. Now 10 years later John sees it differently: “You know I am accustomed to stigma. The way I see it: you get thrown in this arena that you didn’t really choose. But in my life, I want to change the curse into a gift. I am accepting my status, I am feeling ok, healthy, and by sharing my story I want to give hope to others.” 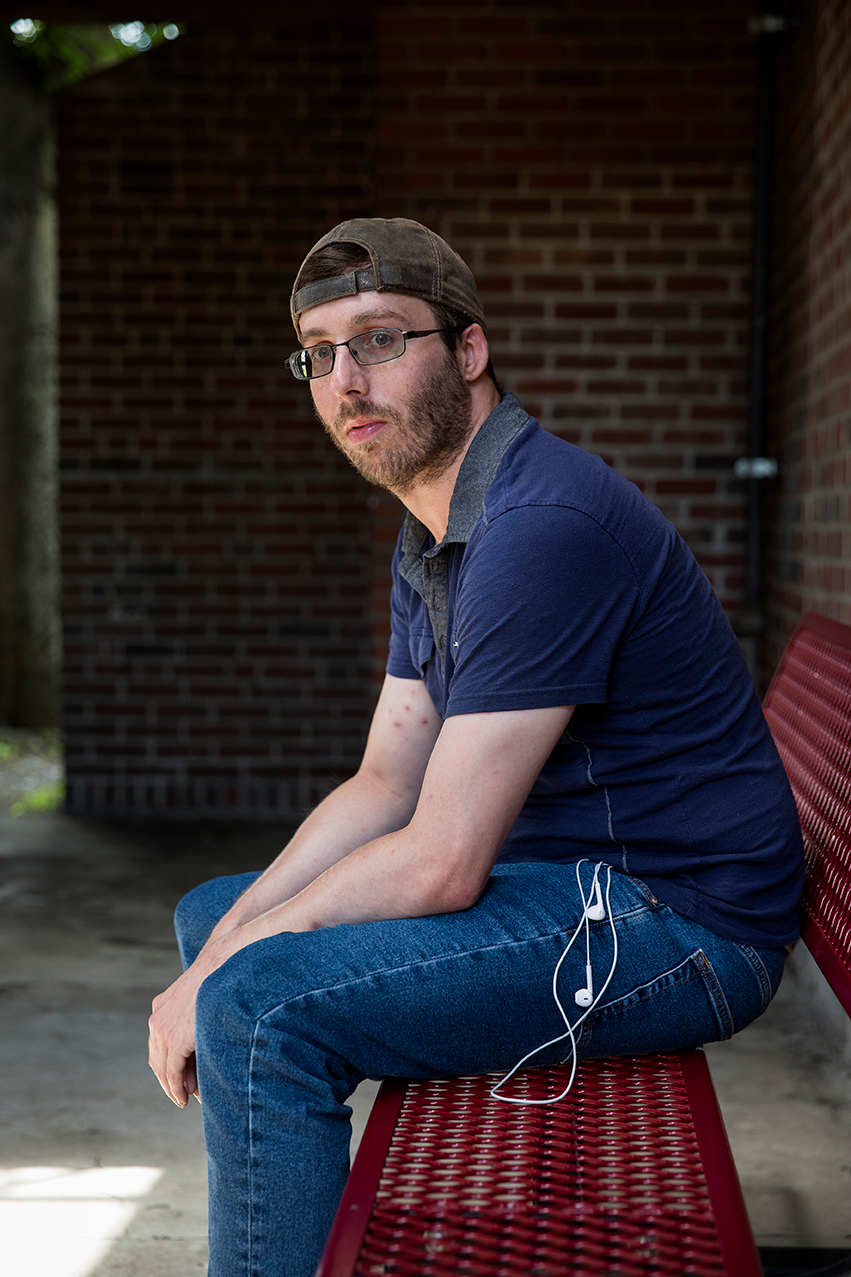 33 years old, lives in Birmingham. Above all David now thinks ahead, the future offers hope.
“In 2011 I fell ill, the doctors first thought it was flu, but it was HIV. I lost a lot at the time … my girlfriend, my job. But my family was there for me. People often don’t know enough about HIV … I was scared too. To cope, I turned to drugs and alcohol. Now I am in rehab, it’s getting better again, I dare to think about the future again. In ten years ‘time I hope to be married and have dogs and cats and a good job. This all happens to me to make me a stronger person: Hope is one thing I am not giving up.”