In San Francisco we’re meeting the people of the first hour, ones who can testify how it was in the early 1980s when “the mysterious illness” struck an entire community. With great warmth these long-term survivors receive us in their own home. Thanks George (top left), Hank (top right), Jesus (bottom left) and Homer (bottom right). 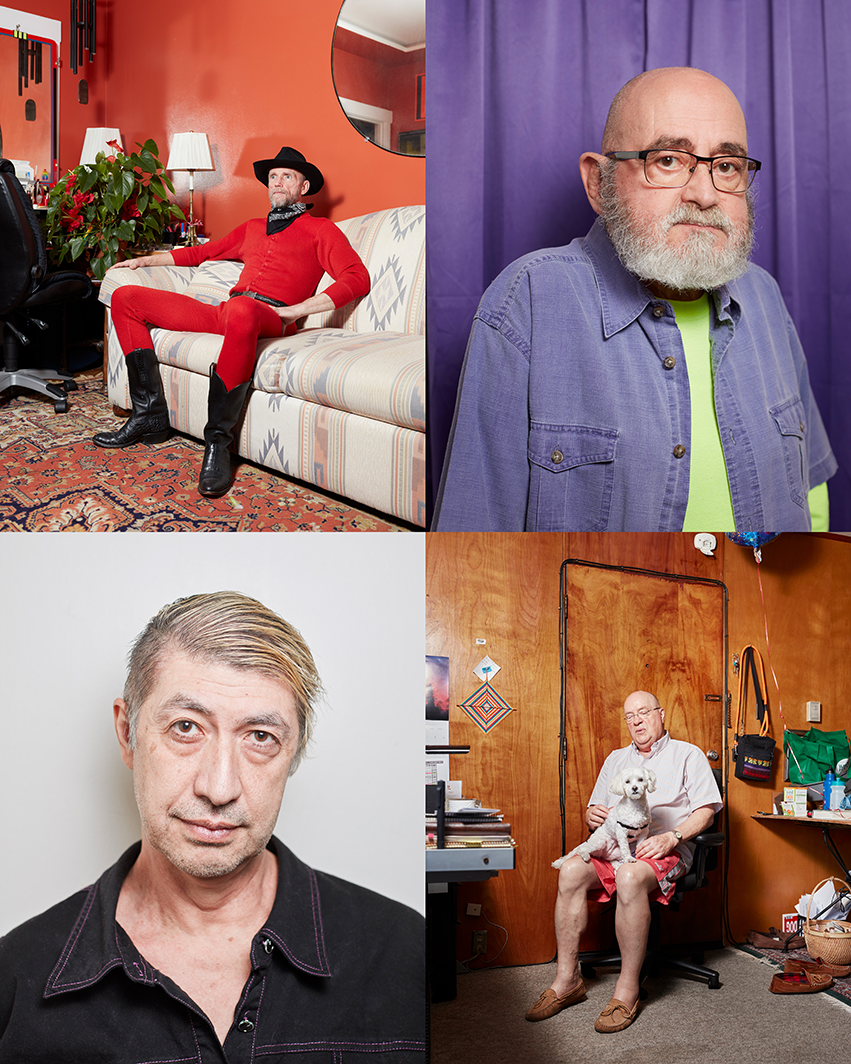 Yoga on the roof, volunteer work at the Harvey Milk Elementary school, and luckily, many close friends: George leads a full life…. He’s 58 years old now and living in the Castro, where about 30 years ago he chose to be among fellow sufferers. “When I turned out to be HIV-positive I decided to live in this neighborhood of the Castro, leaving my small-town family in Texas. I didn’t want to burden them with my suffering. It was a heavy time … the Pride parade seemed more like a funeral procession.”

Hank has lived in San Francisco for 38 years: writer and Editor at Large at “a&u”, which calls itself America’s AIDS magazine. “Rick, my fiancé, convinced me to begin writing again. Then in 1989 came the diagnosis. Time seemed to stand still… “Not many people know any more how terrible it was for us… Support groups like the 50+ group are terrific. We drink coffee, socialize, and help each other. I say to everyone who now turns out to be HIV-positive: ‘Don’t do it on your own.’

Tornado is a poem Hank wrote about HIV and AIDS in Castro. This is just a part.

Our tornado dead are long gone now, long mourned, long loved.
Once the lightning flickered out and the thunder rolled along,
once the wind huffed and puffed its way over the horizon,
we formed search parties and gathered our survivors from among the rubble.
Bruised and scarred, we survived.
We survived because we held each other as tight as we could, as long as we
could, no matter which one of us was sick,

From: ‘Tornado’
Written by: Hank Trout,
Dedicated to: Rick Greathouse

“I don’t think that anybody of the group of long-term survivors is living a normal life. A friend helped me in 1990 to enter San Francisco. I am so grateful to him! Here in San Francisco I discovered the gay community. It was great for me to see this open gay society.

“We as long-term survivors help each other with the problems of feeling lonely or ill. I would not be alive without the help of many people.” Jesus lets us into his house and garden.

“Everything is possible in life”

When we meet Homer he’s in the hospital recovering. Full of energy, he tells about his passions. He’s crazy about history, including his family’s. His father’s grandfather emigrated from Switzerland to Washington State in the 1890s. Happy with the land given away for free, his great-grandfather followed his Swiss roots and started up a dairy farm – not without success, because thanks to being good farmers and buying railways, the family became wealthy. With a new darkroom, Homer hopes to give new life to old negatives of his father’s history.

Homer is proud of his children, now 34 and 37 years old and living with him in San Francisco.

Homer was married and doing well, but actually gay… things were going okay and his wife knew about it, but when he turned out to be HIV-positive, that came to an end: “And the strange thing was, when I found out I had HIV, that’s when I decided ‘Well, enough of this nonsense. I’m really not bi-sexual, because I’m really not interested in having sex with women.’ I really had enough experience with having sex with men. So I knew that sex with women was not something I wanted to do. Everything is possible in life.”