The big absentee on flight 591 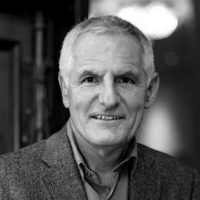 On the flight to Durban there is one person very present because of his absence. Joep Lange, internist, scientist, AIDS researcher and saviour of – according to the commemorations – millions of people with HIV, especially in Africa and on a slightly different scale… the saviour of my dear wife.

In 2014, Joep and Jacqueline and others from the HIV world were en route to the congress in Melbourne on flight MH17. After three hours and four minutes the flight ended abruptly over eastern Ukraine.

Walking to the gate we meet many acquaintances. Marjolein is greeted by someone from the HIV association. They both have the same feeling: this is a strange kind of repeat of two years ago. The same mix of people going to an HIV / AIDS conference. In the plane a few seats from us is someone who two years ago would have been on the same flight. ‘Aren’t you one of Joeps patients?’ she asks Marjolein.

Immediately they start talking about then. She was also on the way to Melbourne. By coincidence she ended up on another flight. Later she spoke at the commemoration for Joep and Jacqueline. Recently she stayed in Jacqueline’s mother’s house and felt Jacqueline’s presence strongly … in a cupboard there was an urn with her ashes

A few hours later, everyone is sitting in the twilight condition associated with long flights. Time stands still, and we see nothing of the world below us except on a map on a screen. People are reading, a man across from us is marking a document on which is printed; Peer Review Only, others are watching movies, someone is rummaging in a bag in the “overhead locker” (be careful when opening the overhead locker, luggage may fall out unexpectedly).

The conference participants around us are all inevitably thinking the same.

According to the map on the screen Africa slides below us. Nigeria, Zimbabwe, Uganda, Botswana.