Pomona is a truck stop where every day dozens of drivers maintain their trucks and take some time to relax. At Pomona there is a gas station, a cafe, a laundromat and a shop. There are also dozens of sexworkers.

Most truck drivers and sexworkers we’ve met came from Zimbabwe. But we also spoke to men and women from Zambia, Ghana and South Africa. Doctors estimate that more than 60 percent of the men and women at Pomona are infected with HIV. North Star Alliance has a container clinic on this site where you can be treated for HIV.

Our man from Zimbabwe

I’m sitting on the veranda of the clinic dozing when I first spot him, the truck driver in his dark shabby outfit who comes quietly but purposefully towards me. Through the dust clouds swirling in the bright sunlight, it’s as if he’s floating at his own pace, in his own world. 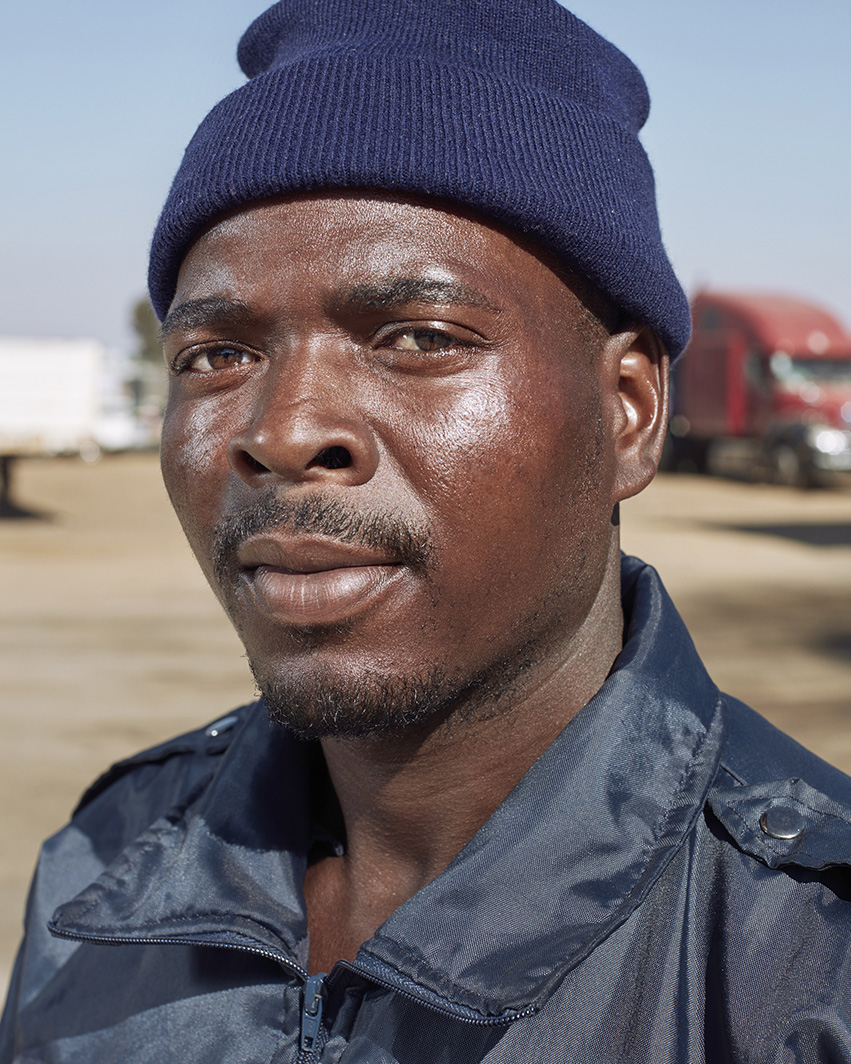 When he’s standing in front of me a few seconds later, I’m surprised when he stretches out his hand and politely greets me.
“Good afternoon, sir.”

I see now that he’s still a young man. The lines that life leaves behind when we age have not yet marked his face. He looks at me without guilt or shame. An explorer, who has yet to take the first steps of his long journey, but trusting that all the days to come will bring good luck.
He’s a remarkable man. Before I can say anything, he surprises me for the second time. “I have come for the HIV test. I told the nurse yesterday that I was coming. Here I am.”

Of course, HIV is prevalent in this world. The nurses who work in the container clinic behind me estimate that 80 percent of the truckers and 60 percent of the sex workers who have gathered on this dusty piece of land are infected with HIV.
It means that nearly all the adult men and women on this piece of land have HIV, a truth that blows me away when it sinks in… But despite the fact that HIV is so prevalent, it’s not talked about much. On the contrary. At this truck stop HIV is not spoken about. Here they whisper about it, preferably after sunset. Telling a strange white man about your HIV test… no one does that.
Except for the unusual man standing in front of me…

“When you’ve finished with the nurse at the clinic, shall we talk?” I ask him.

“Did you get the result immediately?”
He nods. “It was positive.”
“I’m sorry to hear that.”

He looks unfazed, but I feel that appearances are deceiving. It must have been a shock. A positive HIV test is always a shock.

“I’m going to take the pills. Every day. Then you don’t die. I will be fine.”
“Yes,” I say, “that’s right. Look at me. I’ve been taking the pills for 20 years and I’m still not dead. And I’m not going to die either, not for a long time.”
He looks at me with eyes wide. He asks me three times to repeat “20 years”. He’s being told that you can grow old with HIV, that unlike 10 years ago, you aren’t necessarily sick from this virus, you won’t die.
But so much is said, so much is whispered.

The last makes him extremely happy. Men are attached to their man things, it’s as simple as that. We talk for at least five minutes about all those things you don’t often talk about, but which you can’t do without. Three times he expresses his surprise that I’m 56, because that’s really old, especially when you consider all the years that I’ve had the virus in my body. And yes, how good it is even if you’re so old, and have the virus in your body for so long, that “you can still be happy and do the thing.”

I’ve given him the gift of decades of life by my outpouring. That’s how he experiences it. After the setback of the positive test, this is a godsend.

I ask him if he wants to tell me what made him decide to do an HIV test. That’s no problem; after all, we’re friends now. Although he wonders how anyone can be helped by it.

“I’m a truck driver. I work for 11 months, but in December I’m free. Then I go home. We celebrate and party all month. I live in a village in Zimbabwe, two hours from Harare. But December last year, my wife behaved a bit odd. She was not happy to see me. There was much talk in the village. My sister told me that I had to ask my wife.”
“You have to ask her!”
“Then I discovered that my wife was secretly taking pills against the virus. She had another man, she said, who also had the virus. I was very angry and left the house. When I returned my wife was not there. Only our daughters were still at home. I have not seen my wife since.”
“’You should call her’, my sister said. I talked to her once. She did not want to come back, she said. Then the phone stopped working.”
My sister was angry with me. She told me to go and look for her and punish her, and the man she ran away with, too. ”
“Did you?”
“No. No, I did not.”

He really loved his wife. He was angry, of course he was angry, but if she had come back, it would have been okay. He wouldn’t have shut her out because she had the virus. They would have gone through it together.
It was January and he had to go back to work. His mother and his sister promised to take care of his daughters.
“Are your daughters healthy?”
“Yes, my daughters are healthy.”
The 7-year-old was tested first, and then again to be sure. Twice his mother sent him the good news. The 4-year-old was tested, and she was clear too. She still needs to be tested a second time, but he’s confident that she’s also free of the virus. 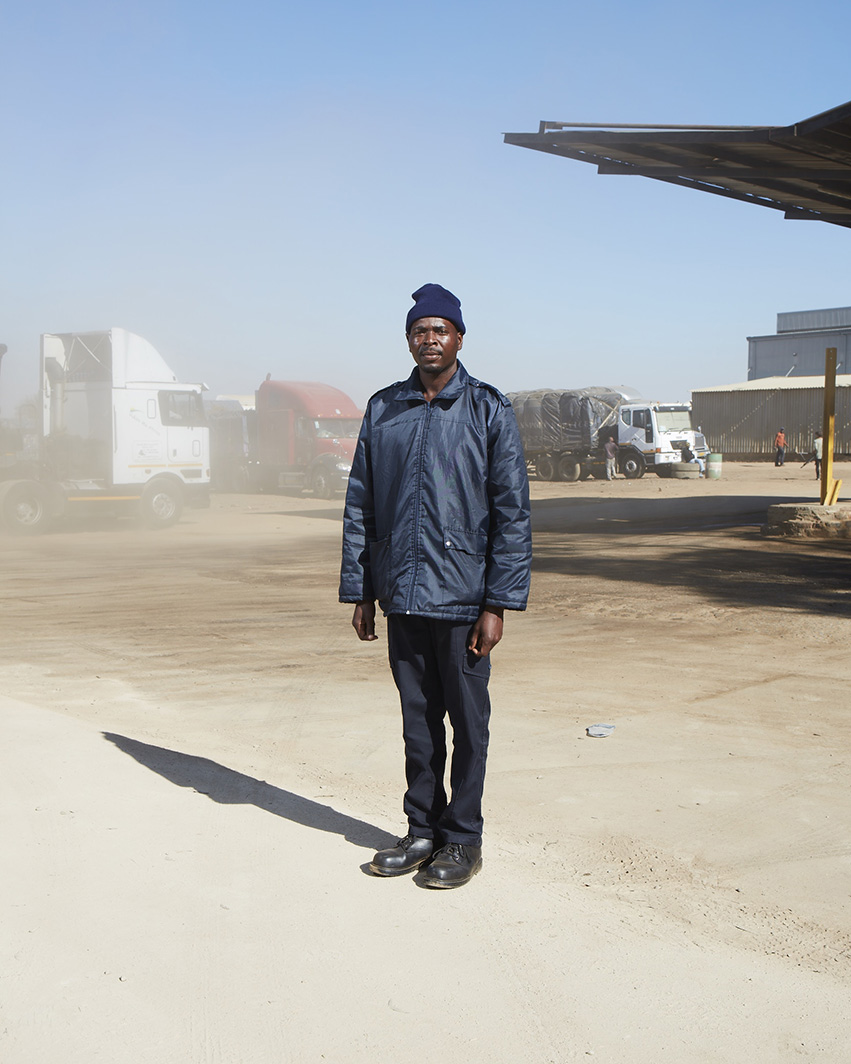 A CIGARETTE, AJAX AND AFRICA

He doesn’t smoke. The clumsy way he clamps the cigarette between his fingers betrays him. But that doesn’t spoil the enjoyment. We both feel deeply the happiness of this special moment. Because when two men sit at a table to talk about life, the intimacy between them is increased with every drag on a cigarette.

“What do you do when you are free, when you have to wait for the next load?”
“Then I clean the truck. And I talk to my friends… ”
“About what?”
“About everything! About the truck, about home, about football… We watch a lot of football together.”
“Back home where I live, in Amsterdam, I also watch a lot of football. I support Ajax… Sometimes I go to the stadium to see a game.”

He doesn’t believe me. How is it possible that he’s here talking to someone who occasionally sits in the stands at the great Ajax? Then he starts to laugh, a laugh that grows and grows, a laugh that increasingly bursts at the seams; and this cheerful disbelief is unstoppable. He hits the table with his hand … “Ajax!!! Ajax Amsterdam!!??”

He’s a smart guy. Wise, in an African style. He’s much more able to withstand the accidents in life than most people I know. I don’t doubt his ability to survive. He will always be able to see the horizon where happiness awaits him. He won’t go under. He is like Africa in the 21st century. Poor, pushed aside, infected with HIV, but with an unshakable belief that the future belongs to them. He doesn’t know my world. Ajax Amsterdam in the Arena is out of reach for him. But the day will come when it will be different, when he sits next to me in the stands. 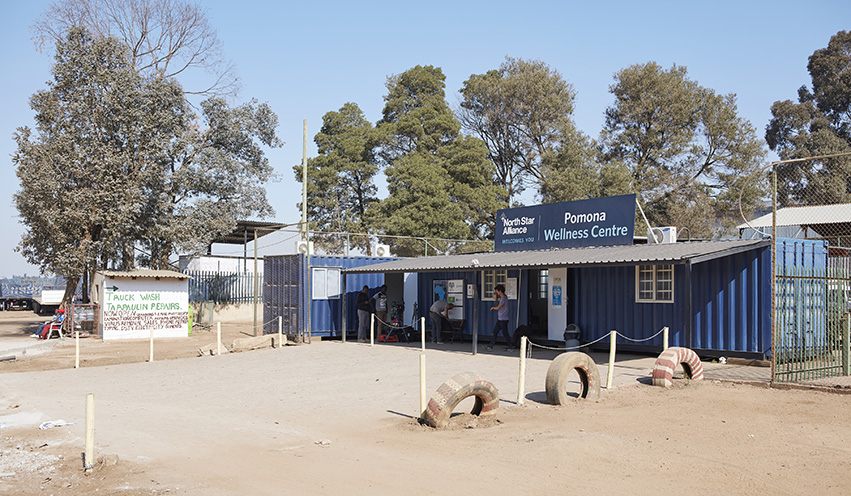 It’s not easy to return to the reason for our conversation. HIV is never an easy subject to talk about.

“So in April you were tested, but the result of the test was unclear, and that is the reason why you came back today for a new test?”
He nods.
“Weren’t you worried over the past few months about the results of this new test? Did you think about not coming back at all? ”
“No. I knew I would be back in Pomona. I always come back here. I arrived two nights ago and made an appointment in the morning… I told the nurses at the clinic in April that I would come back.”

He had some physical complaints and was worried. But perhaps the most important reason for him to be retested was the responsibility he felt, being the eldest son and a father of two.
“I send my money to my mother in Zimbabwe so that she and my daughters can eat, and so that my children can go to school. If I keep taking the pills, I will stay healthy and I can stay on the truck. I have to, because there is no work in Zimbabwe…”

“I’m saving for my mother now. Then she can start her own business in a few years. Then I’m going to save up for a business for myself. Yes, in my village, if I can in my village. That’s better for my daughters. ”
“No longer driving the truck through Africa?”
“If I have a business, I’ll have a car.”
Of course!