In many countries the term “gay” is still a loaded one. In Cambodia too. That’s why people in the international HIV community often use the term “MSM” instead. That stands for “Men who have Sex with Men”.

This juggling with words and abbreviations feels like a hassle for emancipated homosexuals, but for many Cambodians “MSM” is a way out. This way you can share with your friends and family, or if you’re struggling with HIV, with your doctor, that you have sex with men, without outing yourself as gay.

The three young men we spoke with use the terms “MSM” and “gay” interchangeably. It seems “gay” is a hip word. The young men think the word fits them because they prefer to present themselves as emancipated gays, proud of who they are. In contrast, MSM is in their eyes more a term for the insecure older man; for the gay man who is still ashamed of his sexuality and often leads a double life.

Our conversation was about going out, friends and hobbies. But also about difficult topics like HIV, sex work and drugs… Then the acronym MSM sometimes crept back into the conversation.

They’re vulnerable young men. Streetwise, but wrestling with their complicated lives. Lost, with hardly any idea where to go for what they’re looking for. They found out through government outreach programs that they were infected with HIV. It was a blow for all three. They don’t really know how to deal with it. Keep quiet about it and get on with life, so it seems.

We talked on the banks of the Mekong, the river that has wound its way undisturbed through the city forever. But the young men are uninterested in philosophical thoughts and views. They keep their eyes on the boulevard, their playground and their hunting ground. This is where it happens for them. Good and bad days often start here. 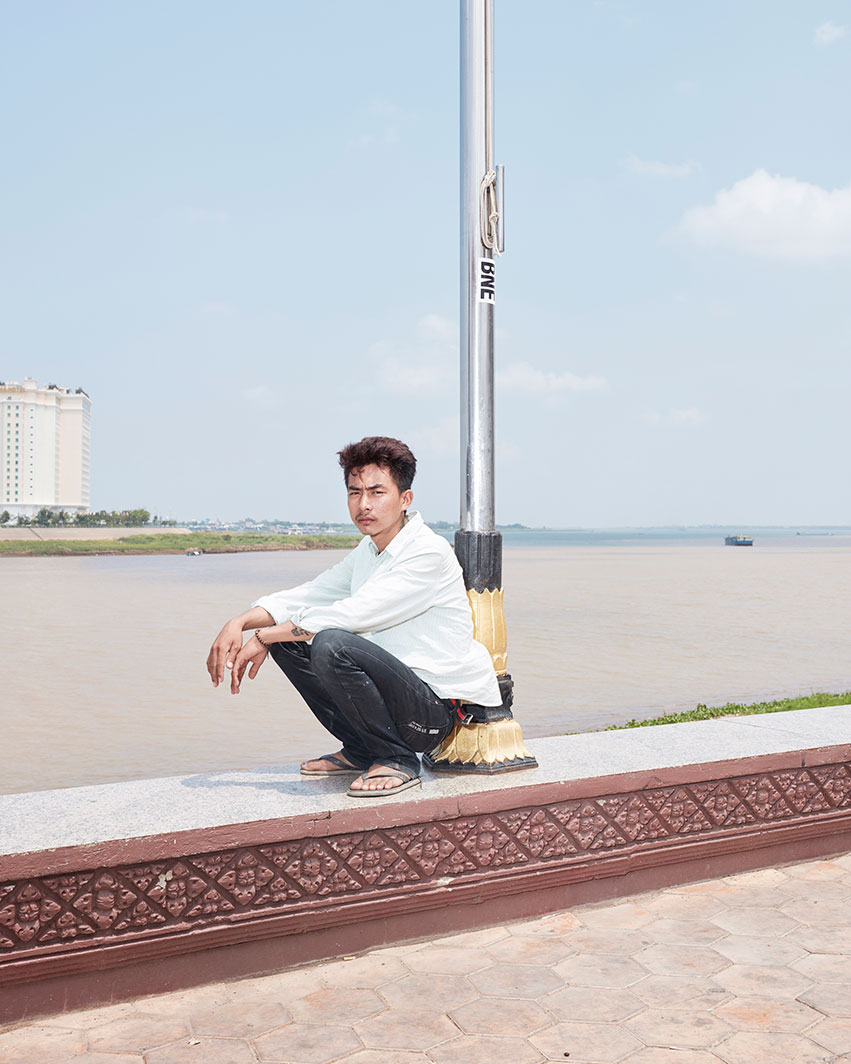 Vin (24) has been openly gay for four years. In that time he’s had five boyfriends, a couple he could rely on, and a couple not. Vin’s life is largely outside the “scene”. He lives together with his older sister because his parents are deceased. First his father died, then six years later his mother.

Three years ago a friend took him for a blood test. Shortly afterward he heard he had HIV. The news was an enormous shock. He was deeply ashamed and did nothing but cry for weeks.
No, he says, he’s not seeing a doctor and not taking any medication. He knows of no doctor who could help him… It seems his HIV infection is a problem he is absolutely not ready to address. The only person he talks with about it is his sister.
Vin is a construction worker, but he doesn’t like the work very much. Security work seems better to him. The pity is that the suits you have to wear aren’t always attractive. “Maybe later I can work in a restaurant, in a MSM club.”

When asked if he’s happy, first comes a long story. Then he falls quiet for a while, to end with: “Yes, I am happy, content. Not every day. Some days are good some days are not. What I like to do most is play football. When I’m free I play every day. ” 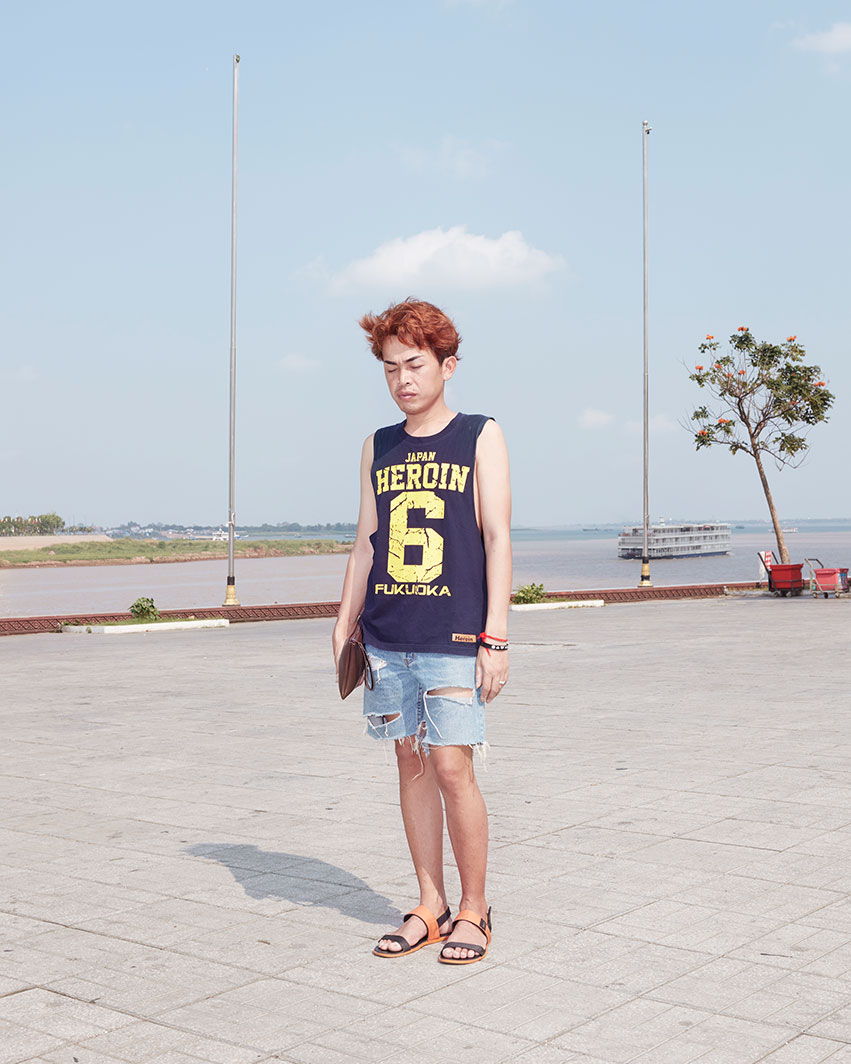 Leb Esa (28) lives with his boyfriend in a small room near the river. Leb is a sex worker, and encounters his customers in the evening on the boulevard. It’s a hard life. It’s hard to find customers and not all the customers are nice to him.

Leb has known for two years that he’s HIV positive. He went with a friend to be tested… The result was crushing. He has a lot to cry about.
Now, every month he sees his doctor and gets a new set of pills. Visiting your doctor every few weeks isn’t uncommon in Cambodia. That’s how they try out using the medication to ease the suffering. For the young men’s health, but also to make the chance as small as possible that they’ll infect others.
That’s difficult enough.
Leb admits that he sometimes misses his doctor visits for a few months; which means he doesn’t take his medication either. A customer who picks him up, his drug use, his daytime life… His HIV infection has to wait now and then.

His parents are still living, but he hasn’t been home for 8 years. His father is so angry that Leb is gay that he no longer wants to see him. That doesn’t keep Leb from sending some money home every month. For his mother and his grandmother. “I love my mother.”
His four brothers and sisters all live near the Vietnamese border. He still sees them. They know about his HIV infection and have no problem with it.

He’s becoming impatient. It’s high time to talk about the good things in life. There are lots of funny stories about going out, his friends, and dancing in the clubs. “To party is the best thing in my life.” He also has good times when his English friend is coming over. This friend works in Thailand for Unicef in AIDS care. He’ll be coming back to Phnom Penh soon. “We have a lot of fun together.”

How things will go on, that he hasn’t yet thought about. He’ll see later. For now things are going pretty well, he says.

Ctn Vanna (29), despite the warm weather, has on his tracksuit. With his sleepy red eyes and soft voice, he’s only half there. The other half is still lingering in a higher sphere.
Vanna works in a nightclub where men meet other men. He loves his job. He usually works in the club’s restaurant. He brings the drinks and cracks jokes. But the most important part of his work is to make sure that the customers are satisfied.

He was born in a little village but has lived for years in Phnom Penh. His parents know he is gay and have accepted it. That’s nice, really nice, because he loves his parents!
About a year ago he learned that he was HIV positive. That news came hard. He had the feeling that people were looking at him and that they approached him differently. It’s better now, but having HIV is still a heavy burden to carry.

Yes, yes, he says, he told his parents about it. At first, they were angry, very angry. Now they’re over the worst fear … They can accept it more easily now…

Vanna lives with his friend, who has no HIV. That’s no problem. Every 15 days Vanna has to go to the clinic for new medication. If he has health complaints, they’re immediately discussed.
“I always go,” he says. Sometimes he may be a few days late, but he never stays away for months. That wouldn’t be good. He also goes to the gym as much as he can, if possible nearly every day. He wants to do all he can to stay healthy.

“I’m a happy boy,” he says. “Happy!!!”
He thinks long and hard. Then he starts a story about when is happiest… “That’s when I can spend the whole day at home watching love stories on television. And I like to eat fried food all day… ”